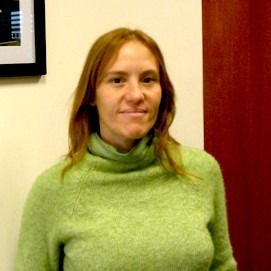 The canker is a disease caused by infection with the bacterium Xanthomonas axonopodis pv . citri , which affects citrus plants and is one of the main phytosanitary problems that today are Argentine growers . In the laboratory, ” Plants- Microorganisms Interactions ” led by Dr. Jorgelina Ottado , IBR , the interaction of these bacteria is studied plants and research associate , Natalia Göttig explains what it is .

“There are far plants resistant to disease caused by this bacterium , so all citrus , lemons , oranges , tangerines, kinotos , grapefruits, are ultimately affected by the canker . Our purpose is to learn more mechanisms using bacteria to infect the plant and study how it can turn defense. From basic research , from studies of the mechanisms of pathogenicity, future new biotechnological tools to counter this disease may arise , ” said the researcher.

The interaction begins when the bacterium enters plants through the stomata present in the leaves or any wound or injury Göttig plant explained , adding that once the bacteria entering the plant tissue, disease states , begins acting tissue intercellular space , multiply and once there is enough bacteria protruding erosion occurs . This is manifested by brown spots , called ” cankers ” . The bacteria is above that bump in the road and when it rains or high winds , emerges and moves , continuing and spreading infection throughout the plant.

The research indicated that one of the dangers of this disease is that when the infection is severe defoliation can occur which weakens the plant and decreases the ability to produce fruits thereof . Not affect the taste , but as the fabric shell breaks, favors and other fungi colonizing the fruit rot faster.

“The same fruit can be marketed in the domestic market , in fact it does, but it consumes about 20 % of production , the rest is exported , but a big consumer as the European Union continues to enter the fruit because it is free zone Xanthomonas ” Göttig said.

“We studied the different mechanisms of pathogenicity using bacteria to adhere to the tissue, multiply and colonize , and to stay in time,” said Natalia Göttig about the different lines of research developed in the laboratory. One of these is related to the study of a natriuretic peptide , which is called PNP in eukaryotic plant cells and which serves to maintain the same water homeostasis .

“Our studies suggest that bacteria acquired plant gene encoding this peptide and expressing this peptide during infection secretándolo and manages to keep the plant tissue with better hydration and healthier. Thus, the bacteria can survive longer in the infected tissue and spread and infect more ” Göttig said.

Another aspect of the subject which we are concerned is the study of factors that allow the bacteria to form biofilms ” A bacterium will infect costs and keep plant tissue if you are single , then what you do is associate with other cells same bacteria and form a community called biofilm . Thus to have a larger number of cells, it can better survive adverse environmental conditions and stay better on the plant leaf which increases their infectivity and prolongs infection. In this regard, we have attempted to discover molecules involved in the formation of biofilms and characterized an adhesin that is much needed at the time of forming , and we have observed that when you introduce a mutation in the bacteria , which eliminates the expression of this adhesin the bacteria lose the ability to form biofilm and adhere to the leaf tissue reducing the possibility of infecting “he said.

“We are studying a disaccharide osmoprotector found in other bacteria that have the function of protection and allows cells to survive in conditions of salt stress , oxidative , or high temperatures , but with respect to the Xanthomonas , this functionality is not known disaccharide what happened. Intone got to study and saw that serves to defend against various Xanthomonas stress, as happened with other bacteria, but the novelty is that turn in the interaction with the plant, it is very necessary to have a good infection. This is a parallel line that is just beginning ” Göttig said.