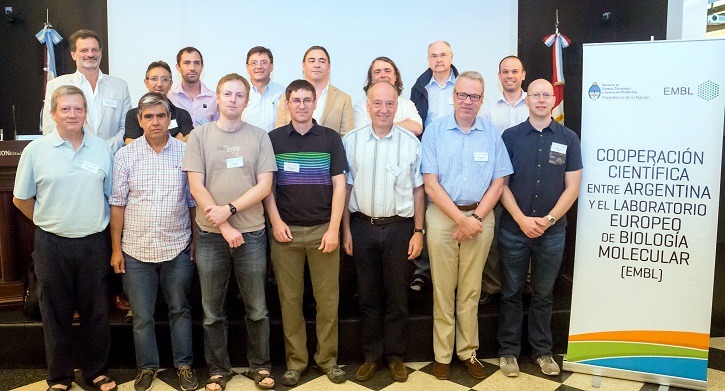 As part of the Associate Membership of Argentina’s network of European Molecular Biology Laboratory (EMBL), the Ministry of Science, Technology and Innovation (MINCyT) organized jointly with the Institute of Molecular Biology Cellular and Rosario the first EMBL Structural Biology Workshop that was held in Rosario on March 16th and 17th.

For two days, leading European scientists visited Rosario, giving conferences on state-of-the-art methods and technology in Structural Biology and established links with researchers and scholars of the academic and technology centers across Argentina.

Alejandro Vila, director of IBR and chair of the event, highlighted the potential benefits in training, innovation and technology transfer that were presented to the more than 60 participants. Argentines scientists participating in the workshop took part of the presentations from seven European researchers that are world leaders in their fields, creating and designing cutting edge technologies that are most often adopted by other researchers worldwide.

“The participation of Matthias Wilmanns, director of two laboratories in Hamburg, Germany, was very prominent. Also Andrew McCarthy and Josan Marquez, from Grenoble, France, presented their developments on fully automated lines for structural biology, that are pushing the limits of high throughput Structural Biology with technologies that are not available in Argentina. Martin Beck, from Heidelberg, Germany, a pioneer in the use of cryo-electron microscopy to determine the structure of supramolecular complexes microscopy, lectured on the most recent advances in the understanding of the nuclear pore structure”, said Vila.

“Having them in Rosario for two days, was more than fruitful and interesting, not only for the local scientific community, which will clearly benefit with the new links created, but for society in general. Many advances in modern medicine are built on prior basic structural biology research studies.

The same is true for biotechnological applications, like improvements in food and fuel processing”says Rodolfo Rasia, researcher at IBR and co-organizer of the activity. The foreign specialists were particularly open and accessible in terms of exchange of human resources and the start of collaboration projects with local researchers.

“On our side, training of human resources in the Rosario and in Argentina, reaches international standard levels. For this reason local students and postdocs, are valued abroad,” said Vila. The MINCyT will fund this year research stays for 6 young Argentine investigators in different laboratories of the EMBL, which will contribute to strengthening partnerships.

Commitments were established to give specialization courses on cutting edge Structural Biology methods in Argentina with instructors EMBL.

One of the main goals of the Workshop was the creation of links and the generation of bases for collaboration, said Rodolfo Rasia, adding that through the discussion groups between professionals in our country and European lecturers, ties were strengthened and potentially fruitful international cooperation links were generated.

The workshop was held in Argentina thanks to the strong policy of science internationalization implemented by the Ministry of Science, Technology and Innovation. In this way our country became an EMBL external member, the second non-European country to integrate the research institution, after of Australia. “The workshop was held in Rosario, co-organized by the IBR, because there is a strong tradition of cutting-edge research in Structural Biology in our Institute” said Vila.

The IBR hosts as well the the Argentinean Structural Biology and Metabolomics Platform (PLABEM), an instrument created to promote the development of structural biology in the country, that will help collaborative projects in this discipline between local researchers and the EMBL.

Finally, Vila said that “from this exchange, being associated to EMBL, we have access to the EMBL laboratories in the context of collaboration, and work there in specific projects. We believe that being able to access the latest research instruments at EMBL will have a very positive impact on the development of such an important tool as structural biology in Argentina “.

“The intention of these was created in the early 70s, a center of art in Molecular Biology; similar entity to which nuclear physics represented the European Organization for Nuclear Research (CERN), and thus compete with the US leadership, “explained Vila.

John Kendrew was the first director since 1974, this laboratory is a non-profit organization, funded by public funds from twenty Europeans, Israel and two associate member States, Argentina and Australia Member States.

As part of the Associate Membership of Argentina at EMBL, the Ministry of Science, Technology and Innovation, promotes collaboration with EMBL providing preferential access to the facilities of the EMBL; participation in research infrastructure projects; the granting of doctoral and postdoctoral joint degrees; organizing courses, workshops and training; and involvement of Argentine institutions in activities of companies linked to EMBL.