The research carried out in our laboratory is inserted in a priority area: the study of the mechanisms of antibiotic resistance and the development of strategies to counteract them. The rapid development of antibiotic resistance represents a great challenge for the prevention and treatment of bacterial infections. This challenge is increased given the small number of antibacterial compounds in final stages of evaluation for clinical use and given the significant reduction in the investment of the pharmaceutical industries in the development of new antibacterial compounds. It is critical to identify new targets for the design of compounds that can be used in the clinical treatment of infections due to resistant bacteria and that present different mechanisms of action than those of currently available antibiotics. In our group, we study the antibiotic-inducible systems of two pathogens of great relevance in the health field: Staphylococcus aureus and Vibrio parahaemolyticus. Specifically, we address the characterization of bacterial membrane proteins that directly or indirectly detect the presence of antibiotics and activate the expression of resistance genes. These membrane proteins are excellent targets for the design of inhibitory compounds that allow restoring the efficacy of β-lactam antibiotics and/or glycopeptides for the treatment of infections. On one hand, we are studying the sensory proteins of the bla and mec systems of resistance to β-lactam antibiotics in methicillin-resistant Staphylococcus aureus (MRSA). On the other hand, we aim to characterize the mechanism by which the two and three component systems VbrK/VbrR of V. parahaemolyticus and VraSRT of S. aureus recognize β-lactam antibiotics or glycopeptides and transmit the signal to the cytoplasm. We employ a multidisciplinary approach that involves the use of photoactivatable compounds, molecular biology, biochemical assays, modeling, and structural biology. Furthermore, we are searching for compounds capable of inhibiting the activation of these systems, and that can restore the efficacy of antibiotics.

Staphylococcus aureus is the main cause of intra- and extra-hospital infections in the world. Recent epidemiological studies demonstrate the emergence of clones with high virulence associated with invasive infections both in the community and in the hospital in the central region of Argentina. There is great concern about the increasing prevalence of infections caused by strains of S. aureus resistant to the action of β-lactam antibiotics (MRSA). The mechanisms of resistance to β-lactam antibiotics in S. aureus are activated only when the bacterium is in the presence of a β-lactam. This activation is regulated by the signal sensor/transducer transmembrane proteins BlaR1 and MecR1. Resistance to β-lactam antibiotics is due to the inducible expression of two enzymes: the serin-β-lactamase PC1 and the transpeptidase PBP2a, not inhibited by clinical concentrations of most of these antibiotics. The genes that encode these enzymes in MRSA (blaZ and mecA, respectively) are encoded in two operons (bla and mec, respectively), which include the genes that encode the BlaR1 and MecR1 proteins. Neither the transmembrane/metalloprotease domain, nor the complete proteins MecR1 and BlaR1, are so far isolatable for the study of their structure and mechanism. Recently, we published a complete MecR1 model based on homology models, residue coevolution data, a new extensive experimental mapping of transmembrane topology, partial structures, molecular simulations, and available NMR data. This study provides the first consistent model of the structure of MecR1 in its inactive form and allowed us to propose a mechanism for signal transduction. In our group, we are trying to characterize the conformational changes that lead to BlaR1 and MecR1 activation in response to β-lactams, using photoactivatable compounds, mutagenesis, reporter strains, X-ray crystallography, among other techniques. The role of the BlaR1 and MecR1 proteins in the induction of resistance to β-lactams makes them excellent targets for the design of inhibitor compounds that allow restoring the efficacy of β-lactam antibiotics for the treatment of infections caused by MRSA. In collaboration with researchers from IQUIR and IBR, we are working on the search for inhibitors of these systems.

Molecular details of the recognition of β-lactam antibiotics and glycopeptides by the sensory proteins of the S. aureus VraSRT system

The emergence of bacteria resistant to β-lactam antibiotics is a worldwide public health problem. Resistant strains of the genus Vibrio (causing acute intestinal infections) have been reported around the globe, posing a threat especially in developing countries. Recently, a new direct sensor system for β-lactam antibiotics that activates the production of β-lactamase has been described in V. parahaemolyticus. It is a two-component system called VbrK/VbrR. This system is mainly found in bacteria of the genus Vibrio, making it a specific target for the treatment of infections caused by species of this genus. Our goal is to understand the molecular mechanism of activation of resistance by VbrK/VbrR. Using biophysical techniques, we aim to characterize the affinity of the receptor for different antibiotics, determine its structure by X-ray crystallography in the presence and absence of the antibiotic, determine its oligomeric state, and generate a system to map the interactions by NMR. This information will provide the basis for the rational design of drugs against these infections. 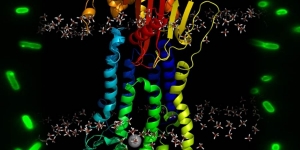