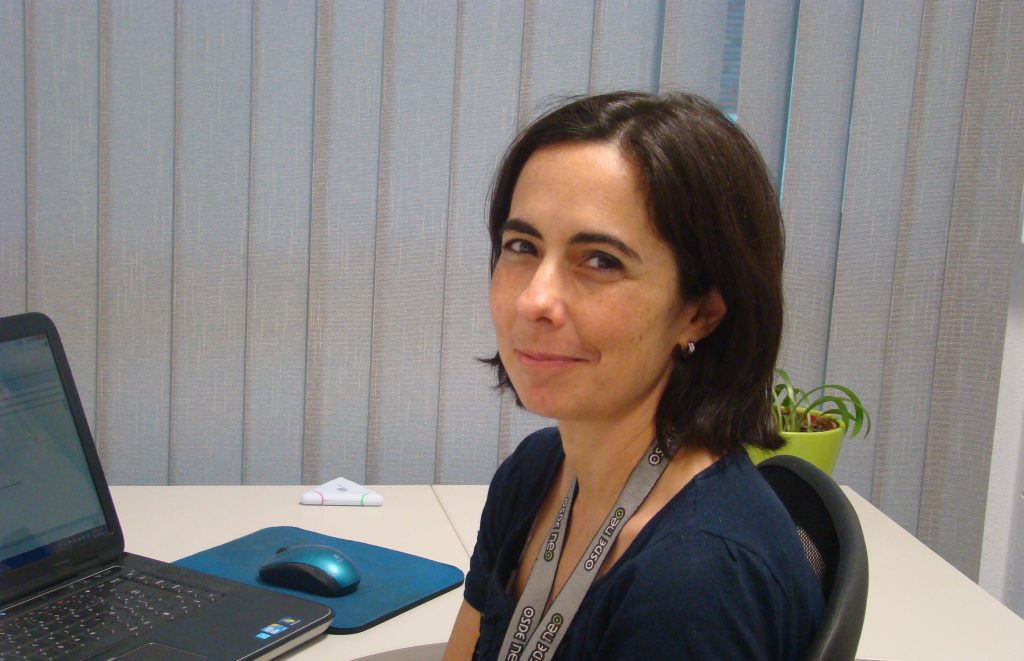 A group of the Institute of Molecular and Cell Biology of Rosario (IBR- CONICET- UNR) led by Dr. Fernando Soncini, developed biosensors that can detect toxic heavy metals in drinking water and industrial effluents, technology that was created from a modified bacteria that turn green when they encounter these metals. Dr. Susana Checa, associate laboratory researcher responsible for the project, explains how they did it and that this discovery is in process of patenting.

In 2001, Dr. Susana Checa entered the lab “Signal transduction in pathogenic bacteria” directed by Dr. Fernando Soncini, Vice-director of the IBR. They began studying specific genes of Salmonella bacteria that could be linked to its pathogenicity, its ability to cause a disease or maintenance of metal homeostasis. “I started characterizing a transcriptional regulator, a protein that binds DNA and decides when other proteins should be produced based on what the bacteria require. This regulator was similar to others previously characterized in Salmonella and other bacteria that detect copper, a toxic but essential metal, and we discovered that we were studying a protein that specifically recognizes solubilized gold and, in response to this metal, increases the production of other proteins necessary for the bacteria to eliminate the toxic metal”, Checa said.

From there the idea emerged of creating the first biological gold detector using non – pathogenic bacteria as a platform. “What we did was take the gene of Salmonella bacteria that carries the information to produce the protein that detects gold and incorporate it into the chromosome of the new bacteria. Furthermore, using genetic engineering, we modified one of the genes that remove toxic metal in Salmonella to produce a green fluorescent protein and was also incorporated it into the bacterium. Thus, when the sensor protein finds solubilized gold in the environment, the production of the green fluorescent protein increases and this protein is readily measurable. The greater the amount of gold present in the sample, the greater the amount of green protein produced”, explained the researcher.

Based on their previous studies in the laboratory, they continued working on the characterization of metal sensor and modifying it by mutagenesis. “We were changing different parts of the molecule to understand how this metal sensor specifically detected gold and no other metals. Thus, we obtained variants of the original sensor that detects not only gold ions but also a large number of metals, always as solubilized metal, or as ions. This was something new in this field of study since, up to that moment, the metal sensor proteins that were already studied detected only some metals, but not as wide spectrum of toxic metals such as the sensor that we developed” said Dr. Checa.

Using a methodology similar to that used to develop the gold biosensor and the new variants of the metal detector protein, the researchers generated the first biological sensors that allowed for the detection of a wide variety of toxic heavy metals in a single assay. “These biosensors can not only inform if there is a presence of copper, gold or silver in a water sample, which are toxic metals, but also if there is mercury, lead and cadmium, which are among the ten most dangerous metals reported by the World Health Organization” said Dr. Checa in regards to the measurement device developed, consisting of bacteria that were genetically engineered to turn green when find any of the metals above mentioned.

“The biosensor can detect metals in just two hours. The tests performed in the laboratory serve as proof of concept that the system really works” the researcher said, adding “The bacteria biosensor can be used directly to detect toxic metals in the laboratory. In fact, it is a very simple, easy to implement, and economical methodology. More importantly, the instruments that are used to detect these metals are generally very expensive, they are installed in specialized laboratories and can be far away or be quite inaccessible to people who want to know the state of the water that they are consuming that comes from wells or a river close to industries”.

“The ideal situation would be to couple the detecting bacteria to a portable measuring instrument. This would quickly show the presence of toxic metals in drinking water directly in the origin” said the researcher and clarified that this should be taken forward by another research group who is interested and has the technical ability and knowledge to the design of such devices.
In relation to the differences between the two developments, Dr. Checa indicated that the gold biosensor has an exclusively use in the field of mining, however, the new technology, since it can be apply in environmental monitoring, has a more general interest , because it allows to quickly detect the presence of toxic metal pollutants.