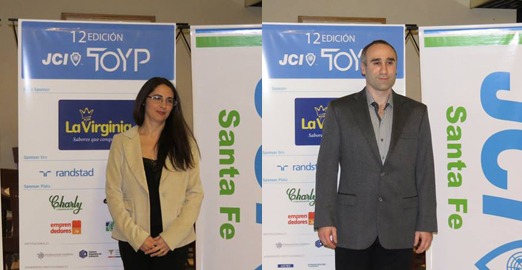 Leticia Llarrull and Gustavo Schujman received “TOYP to JCI Ten Outstanding Young Persons of the Province of Santa Fe” award, in recognition of his outstanding work in the category “Development science and Technology”.

The JCI TOYP Santa Fe Prize is done without interruption for twelve years and this time more than 50 applications , a number that has surpassed the previous editions were presented. JCI Rosario is a nongovernmental organization that works with the intention to produce positive changes in the community, and invites young people between 18 and 40 years to join in this initiative.

Gustavo Schujman is a researcher at CONICET , works in the Technology Platform for Metabolic Engineering INDEAR and teaches at the Faculty of Biochemical and Pharmaceutical Sciences at UNR. At 22 he received the title of Biochemistry at the National University of La Plata and during the last year of his career he received the Scholarship for College Students Featured in Science and Humanities Foundation Lights , which allowed him participate in a research project conducted in the laboratory of Dr. Victor Romanowsky Virology in IBBM and as a result of that experience – one of the first of a long journey that would later move – made ​​a publication in a international Journal on Argentina Hemorrhagic Fever .

After the race grade Schujman returned to Rosario , where he completed his Ph.D. under the direction of Dr. Diego de Mendoza ( IBR) , in the area of ​​Microbiology and thus began a successful collaboration that spanned over 15 years . Together they have published more than 17 papers in scientific journals of international first , several book chapters and are now leaders in lipid metabolism in Gram -positive bacteria in the world .

Leticia Llarrull a degree in Biotechnology , graduated in 2001 from the Faculty of Biochemical and Pharmaceutical Sciences , National University of Rosario . From his first steps in the scientific career has focused on the physicochemical study of protein, particularly in the structural and mechanistic aspects of biological processes . He did his doctorate at the CONICET, under the direction of Dr. Alejandro Vila (IBR) and the results obtained during this period resulted in seven publications in refereed international journals medium to high impact . Today the doctor has added a total of 22 published articles.

In 2008 Leticia Llarrull received a postdoctoral scholarship for students from Latin America in Biomedical Sciences awarded by PEW Latin American Fellowship in Biomedical Sciences , which allowed him to work in the laboratory of Professor Shahriar Mobashery , Department of Chemistry and Biochemistry, University of Notre Dame, USA. That same year he received the Outstanding Dissertation Award granted by the Biophysical Society Argentina .

Among the many scientific contributions that the researcher can include work done in the elucidation of the mechanisms by which bacteria defend themselves against antibiotics, with concomitant release of the resulting scientific knowledge for free use of the entire scientific community . At this time the doctor Llarrull is working in the Laboratory of Metalloproteins (IBR) and is Head of Practical Area of Biophysics , Faculty of Biochemical and Pharmaceutical Sciences at UNR .