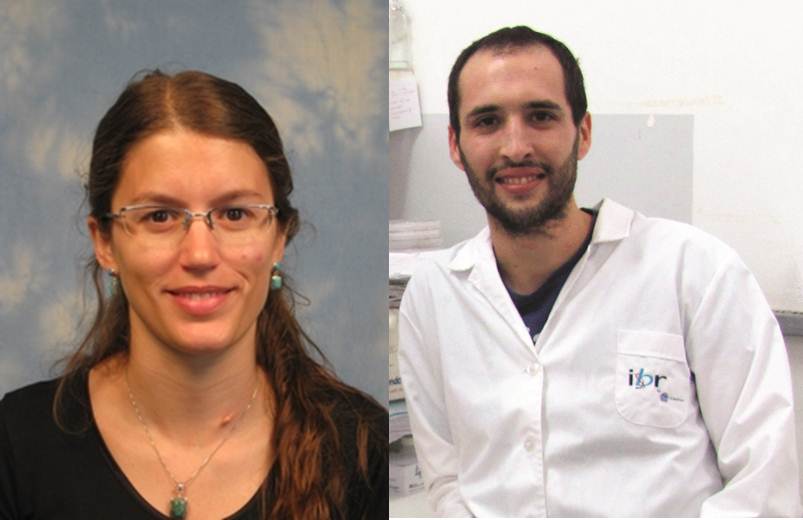 Scholarships awarded annually by the International Programme “Human Frontier Science” ( HFSPO ) benefit young researchers started his scientific career and wish to work in foreign laboratories with innovative and cutting-edge projects. Zaballa Debernardi and were selected for their work in our country. The scholarships serve them young scientists to specialize in the most prestigious international laboratories for three years and amount to U $ S 180,000 each.

“For 20 years, this prestigious award is given and it is very rare to see that two researchers from the same institution are selected one year,” explains Javier Palatnik , IBR researcher , who in 2001 was awarded the same prize.

After a rigorous selection process in a global competition, 90 grants out of 747 applications from 63 countries for Scientists plan to expand their knowledge in the field of biology , physics, chemistry , computer science or engineering were selected .

This year , the HFSP grants support young scientists from 27 nationalities . Applicants from Israel, Germany, the UK and Italy were the most successful among the countries that finance the HFSP organization. Also young people in countries that do not fund HFSP , including Argentina and China are two fellows , Malaysia, Russia and Turkey with fellow becaron each .

Juan Manuel Debernardi degree in Biotechnology , graduated in 2008 from the Faculty of Biochemical and Pharmaceutical Sciences , National University of Rosario . Then Ph.D. in biological sciences at the IBR , directed by Javier Palatnik and Ramiro Rodriguez , and research since then is focused on the relevance of regulatory RNA in plants. With the scholarship , will deepen their scientific training at the University of California, under the direction of Jorge Dubcovsky , a project that aims to study the control of flowering in wheat. Juan Manuel has had the highest average in the School of Biochemical Sciences , as part of the research group of Javier Palatnik has published scientific papers in international journals and has developed a patent to increase crop yields .

Meanwhile, Maria Eugenia Zaballa , Bachelor of Biotechnology and PhD in Chemistry, Graduate School of Biochemical and Pharmaceutical Sciences at UNR in 2008. He completed his Ph.D. at the Laboratory of Metalloproteins, led by Alejandro Vila, in the IBR. His research was based on structure-function studies on copper proteins by Nuclear Magnetic Resonance . He is currently a postdoctoral fellow at the Ecole Polytechnique Fédérale de Lausanne , Switzerland, where he plans to study the role of lipids in the proper functioning of the cell during the period funded by the HFSP grant. María Eugenia was first author of important scientific findings published in journals Proceedings of the National Academy of Sciences of the United States of America (PNAS ) and the Journal of the American Chemical Society ( JACS .)

Postdoctoral fellowships awarded for 3 years to allow the most talented early career scientists , trained in biological or physical sciences, expand their scientific repertoire in foreign laboratories. Subsequently, HFSP alumni returning to their home country can apply for a grant to start your professional development independent research group .

“The grant was very important to establish my group in the IBR on my return from Germany , as it allowed fully equipped laboratory with latest equipment ,” Palatnik , current leader in the IBR group concludes.

Complete listings of the 2014 awards are available on the HFSP web site http://www.hfsp.org/awardees/newly – Awarded