Physiology and Genetics of Actinomycetes

Our laboratory has three major areas of interest; two of them related with lipid metabolism in bacteria and the third one related with the production of antibacterial and antiparasitic compounds. Fatty acids have an essential role in the physiology of bacteria; they serve as important source of energy, as basic precursors in phospholipid biosynthesis and as key determinants of the integrity and function of biological membranes. Therefore, one of our main objectives is to study lipid metabolism and its regulation in bacteria pathogens such as Mycobacterium and Salmonella. The knowledge obtained will be used to identify new drug targets and new antibacterial compounds that could be used to treat the diseases caused by these pathogens. The study of lipid metabolism in actinomycetes, such as Streptomyces and Rhodococcus genera, will be biotechnologically oriented. In this sense, the knowledge obtained in our basic studies will be used to optimize these organisms through metabolic engineering in order to convert them in biological platforms for the production of biofuels and biolubricants. Another area of interest for our lab is the optimization for the production of natural compounds of pharmacological interest in Streptomyces and in Escherichia coli, as well as the biosynthesis of new compounds with new or improved activities through combinatorial genetic engineering.

Regulation of lipid metabolism in Streptomyces

In most living organism fatty acids play a fundamental physiological role; they serve as important source of energy, they are the precursors of phospholipids biosynthesis and represent crucial determinants of integrity and function of biological membranes. Due to the essential role of these molecules in the physiology of the cell, their synthesis and degradation must be finely tuned for the maintenance of stable membrane composition. Furthermore, the relevance of lipid metabolism and its regulation for the production of biofuel has renewed the interest of the scientific community in this research area. Streptomyces present a complex lipid metabolism. Many of the members of this group of microorganism synthesize secondary metabolites (widely used in the industry as: antibiotics, antiparasitic, immunosuppressant and anticancer drugs) that require the same substrates as the fatty acid biosynthesis. Moreover, these bacteria also produce and accumulate triglycerides, which represent an alternative destiny for the fatty acids. As a main goal of our research we decided to investigate the genetic and biochemical mechanism that control lipid metabolism in the oleaginous bacteria S. coelicolor. The specific aims of our project are: a) Characterization of the transcriptional factors that regulate fatty acid biosynthesis and degradation, b) identification of the metabolic signals that are sensed by these regulators, c) identification and characterization of the genes involved in fatty acid degradation, d) identification and characterization of the phosphatidic acid phosphatase enzymes involved in the generation of diglyceride for the triglyceride biosynthesis. As a long-term goal, we plan to engineer the metabolic routes involved in TAG biosynthesis in S. coelicolor in order to improve their yields to further utilize them as biofuel precursors; alternatively we could modify the triglyceride biosynthetic pathways and redirect the fatty acid pools for the production of “microbiofuels”.

Regulation of lipid homeostasis in mycobacteria

Mycobacterium tuberculosis, the etiologic agent of tuberculosis (TB) in humans, continues to be a major health problem worldwide. Mycolic acids, one of the most important lipids of the outer membrane of mycobacteria, have been largely associated with bacterial virulence and antibiotic resistance and its biosynthesis pathway is one of the main targets for TB treatment. Biosynthesis of mycolic acids involves two structural distinct fatty acid synthase systems, FAS-I and FAS-II, which should work in a finely coordinate manner to keep lipid homeostasis tightly regulated. The main goal of this project is to understand how mycobacteria exert this exquisite control over the biosynthesis of their membrane lipids and find out the key components of the regulatory network that control fatty acid and mycolic acid biosynthesis at the transcriptional level. To achieve these goals we propose to use a multidisciplinary approach including genetic analysis of conditional mutant strains, both in Mycobacterium smegmatis and M. tuberculosis, the identification and characterization of the metabolic signals that are sensed by the regulatory proteins involved in the FAS-I/FAS-II regulatory network by using biochemical and spectroscopic techniques, and finally the determination of the transcription factors structure by X-ray crystallography. A better understanding of this complex process of regulation of lipid homeostasis in mycobacteria will greatly contribute to the development of new strategies to control this disease, including the design or identification of compounds that could deregulate fatty acid biosynthesis and induce bacterial death.

Bacteria of Actinomycetes group have provided more than 45% of all natural products for therapeutic used, with 80% of those compounds are produced by bacteria from Streptomyces genera. The general objective of this project is to seek of new compounds having biological properties with interest therapeutical. One strategy used for generation structural modifications to the natural products is through the engineering the biosynthetic pathways of the compounds with the aim of altering the glycosilation patern. In this project we are using this strategy for generating new macrolides antibiotics derivatives of erythromycin and azithromycin by additioning of aminozugars. These modifications have provided improment of the antiparasitic properties against Plasmodium falciparum. Now we are curryng studies for understanding the structural-activity relationship and its possible target. The polyketides are one important group of natural products which are synthetized in a similar way as fatty acids by successive condensation of small carboxylic acids like acetyl-CoA. In addition, acetyl-CoA is a link between glycolisis and Krebs cycle generating the electrons for respiration and precursors such as amino acids for cellular structures. Thus, in Streptomyces acetyl-CoA is a key metabolite for the interaction between primary and secondary metabolism. Based on that our objective for this part is the study of metabolic pathways involved in the metabolism of acetyl-CoA, in the interaction between glycolisis and Krebs cycle in Streptomyces, and their effect over the availability of this precursor for the biosynthesis of poliketide antibiotics, fatty acids and triacylglycerides of biotechnological interest. This project will increase our knowledge of different aspect of metabolism of Streptomyces and its effect over the production of secondary metabolites, allowing in the future, develop a rational design for the increasing production of teraputical interesting compounds.

Salmonella is a facultative intracellular pathogen capable of infecting a wide range of animals, causing diseases ranging from self-limiting enteritis to typhoid fever. In last years problems related to Salmonella have increased significantly, both in terms of incidence and severity of cases of human salmonellosis. The emergence of multidrug-resistance Salmonella strains with resistance to fluoroquinolones and third generation cephalosporins is a serious development, which results in severe limitation for effective treatment of human infections. Importantly, non-typhoidal Salmonella serovars can cause invasive infections in immuno-compromised adults. This has emerged as a major public health problem in the context of HIV in sub-Saharan Africa.Salmonella uses two type III secretion systems to deliver effector proteins directly into the host cell to promote infection and disease. The virulence of this pathogen relies on its ability to establish a replicative niche, named the Salmonella-containing vacuole (SCV), inside host cells. This vacuole is a specific membrane-bound compartment that is generated by the coordinate activity of different eukaryotic host proteins that are modulated by effector proteins secreted by Salmonella. However, the microenvironment of the SCV and the bacteria metabolic pathways required during infection are largely undefined.The objective of our group is to develop different biological probes called 'biosensors' whose expression is modulated by the environment and the physiological state of the bacterium. These probes are designed to monitor the expression profile of genes involved in the biosynthesis or degradation of fatty acids. Consequently the results will reflect the adaptive metabolism used by Salmonella to survive during the infection process. 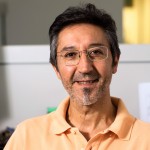