In terms of the study of MβLs, we are now dedicated to the design and evaluation of inhibitors of these enzymes based on previous results from the group that support the hypothesis that the different classes of MβLsshare the same catalytic mechanism, despite the structural diversity observed among them.

Regarding the study of the cytochrome c oxidases(COX), copper enzymes which carry out the reduction of oxygen in the culminating stage of cellular respiration, we are now focused on the characterization of the biologic mechanisms of transport and insertion of copper ions, and on the regulation of the function of the copper sites found in these proteins through fine-tuning of its electronic and tridimensional structure.

Our group follows an interdisciplinary approach for the study of the above mentioned systems, using a combination of techniques from different fields: molecular biology, biochemistry, classic structural biology (X-Ray diffraction), spectroscopy (nuclear magnetic resonance, UV-Vis and fluorescence spectroscopy, circular dichroism, etc), and modern enzymology (steady-state and stopped-flow kinetics). We also use in vitro directed evolution as a means of predicting the evolution of the target enzymes.

β-lactam antibiotics are the most employed chemotherapeutic agents against bacterial infections. The most prevalent resistance mechanism encounter in pathogenic and opportunistic bacteria is the expression of β-lactamases, enzymes able to hydrolyze these antibiotics, rendering them useless. Metallo-β-lactamases (MβLs) are the most recent generation among these proteins. MβLs are broad spectrum enzymes, since they are able to inactivate all β-lactam antibiotics, including carbapenems (the last resource in therapeutic prescription). Genes coding for MβLs are present in mobile genetic elements, to that they have been disseminated world-wide among opportunistic and pathogenic organisms. This picture is aggravated by the structural diversity among MβLs, which makes it difficult to design a pan-MβL inhibitor. In particular, enzyme NDM-1 (http://www.bbc.co.uk/news/health-10925411) has recently been disseminated worldwide, and there are no perspectives of an effective inhibitor, thus representing a threat for global health. Our main goal is to elucidate the structural determinants of function in these enzymes by means of biochemical, structural, mechanistic and evolutionary studies, with the ultimate goal of designing a clinically useful inhibitor. So far, we have been able to: (1) propose a catalytic mechanism for MβLs based on the characterization of a common reaction intermediate, (2) identify the in vivo functional species of MβLs and (3) explore their possible evolutionary pathways. We are now exploiting this knowledge to design new MβL inhibitors, assuming that they share a common catalytic mechanism despite their structural diversity. We currently undertake an interdisciplinary approach, using tools from molecular biology, biochemistry, enzymology and structural biology. Mechanistic studies are performed by using fast-mixing techniques and various spectroscopies to monitor changes in the enzyme active site and in the substrate in a catalytically relevant timescale (miliseconds). We employ protein crystallography and NMR to characterize the binding mode of possible inhibitores. identificar intermediarios de reacción. Utilizamos cristalografía y/o Resonancia Magnética Nuclear (RMN) para caracterizar el modo de unión de posibles inhibidores a estas enzimas. We also use techniques of directed evolution in vitro to anticipate possible evolutionary events of these enzymes, and to understand how different mutations are fixed during evolution.

Copper in biological systems: Fine tuning of the reactivity and uptake mechanism of copper sites in electron transfer proteins.

Cellular respiration depends on the fine tuning of several redox processes, which end up in the reduction of molecular oxygen mediated by cytochrome c oxidases. Copper is a transition metal ion, which is essential for electron transfer in these enzymes, but becomes toxic at high concentrations. Therefore, intracellular copper levels are tightly regulated, as well as its mechanism of transport, storage and deliver to metalloproteins. We are currently studying: (1) the biological mechanism of copper transport and delivery into terminal oxidases, and (2) the fine tuning of the function of these copper sites by changes in their 3D and electronic structure. We have identified the different proteins involved in the transport and insertion of copper in the CuA site of bacterial cytochrome oxidases, and we have characterized the mechanism of copper insertion at atomic level by using NMR spectroscopy. In order to study the electronic structure of electron transfer copper site, the standard methods of structural biology are insufficient, since they only provide the 3D structure. We use different spectroscopic techniques (mostly NMR) to determine the electron spin density distribution in these copper sites, and to study how the protein structure fines tunes their reactivity by changes on the electronic structure. We have proposed that the high efficiency of the CuA site in cytochrome oxidases is due to the presence of low-lying excited states which become populated at room temperature. 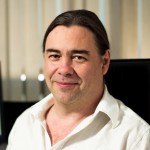 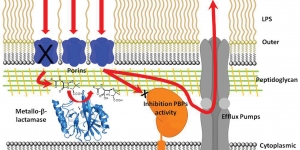 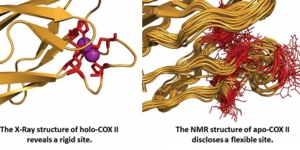