Mechanisms of Bacterial Resistance to Antibiotics

Our research activity is devoted to the understanding of the mechanisms of resistance to B-lactam antibiotics (in particular, carbapenems) and the identification of environmental reservoirs and dissemination strategies of B-lactam resistance genes among local strains of Gram-negative bacteria responsible of nosocomial infections. In the opportunistic pathogen Acinetobacter baumannii carbapenem resistance is attributed to both a reduced permeability across the outer membrane (OM), thus limiting access to periplasmatic targets, and the presence of periplasmatic B-lactamases with carbapenemase activity. We are studying the contribution of each of these mechanisms to carbapenem resistance evolved by multi-drug resistant clinical A. baumannii strains of local origin, and we have identified OM protein channels such as CarO which are involved in carbapenem influx. We have also found that strains bearing particular mutations resulting in carO inactivation or in certain modifications of CarO protein structure also possess higher carbapenem resistance. We are currently studying CarO roles in A. baumannii physiology and pathology, and found that it functions as an OM channel with high specificity for basic amino acids including L-ornithine, an abundant compound in wounds and burns. We have also detected a high level of polymorphism in carO among the A. baumannii clinical population, and the exchange of carO variants due to horizontal gene transfer, findings that could explain the dissemination of carbapenem resistance.

We are identifying reservoirs of carbapenem resistance genes at the local level. We described recently that not related environmental isolates of Pseudomonas putida act as reservoirs of blaVIM-2, which encodes a metallo-B-lactamase (MBL) also conferring carbapenem resistance. We have also found that this gene is present in an unusual class 1 integron, which is in turn embedded in a type-2 Tn402 transposon, being all the arrangement carried by a broad host range conjugative plasmid. This Russian doll-like complex genetic platform contained in an environmental reservoir such as P. putida could explain the broad local dissemination of blaVIM-2 among several opportunistic pathogens.

Finally, we are also studying the cooperation between cytoplasmatic and periplasmatic protein folding assistants (molecular chaperones) in the biogenesis process of MBL responsible of broad B-lactam resistance in Gram-negative bacteria. Using as model the secretion of GOB MBL in Escherichia coli, which promotes the acquisition of resistance to several B-lactams including carbapenems, we have identified roles of several chaperones included an “expanded” DnaK system in assisting the cytoplasmatic transit of the pre-protein in a competent state for secretion by SecA-SecYGE. By using genetic procedures we are also identifying periplasmatic proteins involved in GOB biogenesis. The results of these studies may help identifying potential therapeutic targets for treating bacterial infections.

The massive introduction of antibiotics in nosocomial environments has resulted in the selection of microbial strains with novel and multiple resistances to several antimicrobials, a phenomenon designated multi-drug resistance (MDR). Many of the strains have shown a huge potentiality both to evolve now resistant mechanisms as well as to acquire them from other bacteria by horizontal gene transfer (HGT). Thus, the introduction of new antibiotics is rapidly followed by the selection of newly resistant strains in a vicious circle of undesired both social and economic consequences. Facing this challenge necessarily requires of rational approaches based both in a detailed knowledge of the mechanisms responsible of the resistances as well as the physiology of the organisms that manifest them. Our aim here is to contribute to the elucidation of mechanisms of resistance in aerobic Gram-negative opportunistic pathogenic bacteria of the genus Acinetobacter (family Moraxellaceae) and Pseudomonas (family Pseudomonadaceae), the reservoirs of the cognate genes, and their dissemination by HGT among nosocomial bacteria. 1.1. Carbapenem resistance in Acinetobacter baumannii Some Acinetobacter strains, and in particular A. baumannii, have shown an enormous potential to evolve MDR representing main causes of infections among immunocompromised patients. The carbapenems permeate the bacterial outer membrane (OM) though hydrophilic protein channels, and mutations that alter either the expression or the structure of these channels can result in a reduced drug susceptibility. The additional presence of β-lactamases displaying carbapenemase activity (either intrinsic or co-opted due to HGT) may synergistically increase the drug resistance of the bug. Still, little is still known about A. baumannii OM channels responsible of carbapenem permeation, β-lactamases responsible of carbapenem hydrolysis, or dissemination mechanisms of the cognate genes among the nosocomial population of this opportunistic pathogen. We found previously that carbapenem resistance among genomically related MDR A. baumannii clinical isolates is correlated with the loss of an OM protein of 29 kDa, which we designated CarO. We cloned the carO genetic locus, and found that this gene codifies for a -barrel OM protein. We also found that carO disruptions were mediated by different insertion sequences (IS) in different carbapenem-resistant A. baumannii, findings that led us to propose that CarO represent a carbapenem OM channel in A. baumannii. Moreover, we also identified that CarO has a remarkable specificity for L-ornithine, and other basic amino acids such as L-arginine with less affinity. Since these two amino acids are abundantly present in wounds, we postulated that they could signal the presence of an entry door in a compromised patient. Our main objectives here are: i) to evaluate the relative contributions of reduced OM permeability and carbapenemases to carbapenem resistance among MDR local strains of A. baumannii; ii) to characterize carO including sequence polymorphism, role in the resistance, and functions in the physiology and pathogenicity of clinical populations of A. baumannii; iii) to evaluate the role of HGT in the evolution and dissemination of resistance among the clinical population of this opportunistic pathogen. 1.2. Reservoirs and genetic platforms responsible for the mobilization of carbapenem resistance genes among environmental Pseudomonas spp. We recently identified in a carbapenem resistant Pseudomonas putida clinical strain an unusual class 1 integron bearing a blaVIM-2 gene, which was embedded in a complete Tn402-type transposon inserted in turn in a plasmid, which could be mobilized to E. coli and P. aeruginosa hosts. This complex element located in a resistant reservoir such as P. putida could explain the ample distribution of blaVIM-2 in opportunistic pathogens including P. aeruginosa. We are now characterizing genes responsible for the mobilization of the plasmid among different hosts and the transposition of the Tn402 element in them.

Proteins responsible for beta-lactam resistance, either OM channels or periplasmatic beta-lactamases, require to be secreted from the bacterial cytoplasm to the respective compartments of function. Bacteria possess evolutionary conserved systems such as the Sec machinery which cooperate with different folding assistants (molecular chaperones) to secure the correct protein biogenesis. These are complex protein machineries that maintain a correct protein homeostasis preventing aggregation of misfolded proteins and assisting their folding, intracellular traffic, structural maintenance, degradation, etc. Many molecular chaperones are also stress proteins which participate in the maintenance of cellular viability from diverse stress situations including extreme temperatures, desiccation, antimicrobial action, etc. The cooperation between components of the secretion machinery and different chaperones in the complex intracellular milieu are still obscure, although dysfunction and/or lack of cooperation between them promote alterations in stress resistance and even pathogenicity. It follows that a precise knowledge of this functional cooperation bears high relevance at both basic and applied levels. We are studying the cooperation of the protein machineries mentioned above in the process of protein biogenesis in Gram-negative bacteria, with special emphasis in secretion proteins involved in beta-lactam resistance. For this study we use both genetic and biochemical tools. We have an important collection of mutants in different components of the chaperone and protease systems of E. coli, and the ability to manipulate this and related bacterium such as Salmonella enterica in order to identify novel genes involved in the secretion of specific proteins. We have identified and cloned the genes coding for a metallo-beta-lactamase (GOB) from a clinical isolate of the Gram-negative pathogen Elizabethkingia meningoseptica, and characterized the substrate range of this protein. We found that the expression of the cognate gene in E. coli results in the secretion of GOB to the periplasm with the consequent acquisition of beta-lactam resistance by the bacterial cells. We reported recently that an “extended” DnaK system is the main collaborator of the Sec machinery in GOB secretion, thus identifying a potential target for the design of novel antimicrobials. Using transposon mutagenesis we are searching for genes coding for periplasmic proteins involved in GOB biogenesis, either its productive folding or the acquisition of Zn(II) in the periplasm. 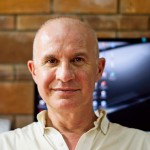 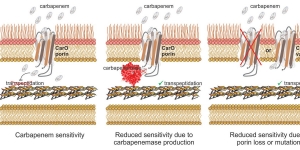