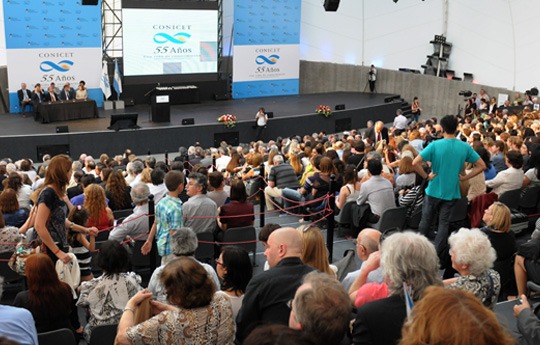 Under the slogan ” A lifetime of knowledge ” was held in remembrance by Technopolis 55 years of the National Council for Scientific and Technical Research ( CONICET) . The event was chaired by the Minister of Science, Technology and Innovation , Dr. Lino Barañao , and President of the Council , Dr. Roberto Salvarezza .

In the Nave of Science more than 800 attendees participated in the recognition awarded to 24 researchers with honorary distinction Researcher Emeritus and 107 researchers for their promotion to higher class in 2009 and 2012 , including the Director of IBR , the Dr. Alejandro Vila, was one of the promoted brand new .

During the ceremony, the minister Barañao noted that “the creation of CONICET allowed people to do research , a career,” and noted that ” more equal countries are betting on the knowledge development. We believe that this is a model that can be applied in the country, but the only way is to put science at the service of national development . ” On the other hand , recalled that Salvarezza “At 2000, CONICET came drowned economically and institutionally . Since 2003 scientific activity was recognized as a basic input for the growth of the country . ”

The minister stressed that Barañao ” to celebrate the achievements of the CONICET , is a collective achievement . The scientists were dangerous dictatorship in the 90 dispensable ; Today we are taking a science only cultural role , an activity for the few, and we are putting at the service of industry and the development of the country. ”

In his speech the president of CONICET , Roberto Salvarezza , referred to the evolution of the organism throughout Argentina’s history , noting currently living the scientific and technological system in the country. “Reconstruction of the scientific system was a task undertaken by the national government in 2003 taking up a clear goal: science and technology as a basic input for the development of the country. A system that would lead to a better quality of life for citizens. ”

This reconstruction , as implied Salvarezza ” profound policy changes that had been made ​​in Argentina . From the symbolic, through the recovery of Science and Technology as remarkable and recognized activity in society, to the material, greatly increasing the economic contribution of the Federal Government in this scientific field in the country. ”

One aspect highlighted is directed to the relationship of CONICET with public universities, in order to promote scientific and technological research in the country . ” can not conceive of the current CONICET without the Public University by his side, as partners,” and that “90 % of the institutes of the Council are double dependence on public universities.”

The CONICET is composed of 192 research institutes and centers , 13 Science and Technology Centers , and two multidisciplinary centers . Recently six Research Centres and Transfer were created. Meanwhile , the agency is among the top 100 institutions for the production and quality of scientific papers , a total of 3300 in the world. And in this sense , is positioned first and second in Latin America in Argentina .

The distinction of emeritus , recognizes the work of those researchers who exercised leadership and management functions of CONICET and collaborating on various advisory bodies within the institutions that make up the National System of Science, Technology and Innovation. His selection was made based on their quality , breadth and regularity of its productions , taking into account the influence of his work in the advancement of knowledge or the improvement of the quality of life of society. We also considered their ability to train new generations of scientists, conducting working groups or centers of scientific and technological research.

Of the 107 researchers promoted to the rank of ” Senior Investigator ” , 21 correspond to the area of agricultural sciences , engineering and materials ; 37 to the biological and health ; 39 to that of the natural sciences ; 9 to area social and technology 1 , transversal to all major areas.